It has been a year since we relocated to the US and I have encountered quite a few friends/ colleagues who are thinking of either relocating to the US or returning to India. While the motives could be many and different, there is one common concern: “How much to earn? (to maintain the relative standard of living)”. This question has been asked by both aspirants (India to the US) and hesitants (the US to India).

While the “aspirants” presume that a lot could be saved in the US, the “hesitants” wonder how expensive it is to live in India. Despite visiting the US many a times, I did not realize how expensive to lead a standards-matching life in the US, until I seriously thought about and planned for it. Similarly, many of my friends who occasionally make short visits to prime cities in India exclaim how people are able to live with such high prices.

For a while, I simplified it with, “yeah, there are a certain things which are expensive in the US and certain other in India”. Recently, I did a little bit of comparative analysis of earnings and relative expenses in both the countries. To my surprise, barring a few infrequent expenses, both the countries are equally expensive, in many ways.

Here is a simple chart of various recurring and infrequent (but common) expenses and their comparison. I have taken the case that many of my friends (including me, of course) can relate to.

I am sure there is a lot of variety in each one’s earning sources and spending patterns. When you attempt to derive based on one sample earning-expense scenario, I am sure there would be more disagreements than agreements. Respect. Nevertheless, I hope this chart helps to get a bird’s eye view of the expenses relative to the earnings in both the countries for the segment of people that I chose. 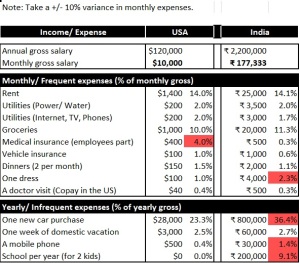 “Standards matching” could be interesting. For e.g., a Honda Accord in the US is equivalent to a Suzuki Swift, and not a Honda Accord, in India. And there are certain things (services like maid, cook, driver, etc.) are just not viable in the US. Hence, the “standards matching” is considered as relative within the context of that country and not an absolute comparison between the countries.

Conclusion: An earning of 120K in the US is equivalent to 20-25Lacs in India to match the respective living standards* and you are likely to find that both the countries are equally expensive. Anything above that is a luxury. Ultimately, you will be happy as long as you like to be happy with what you earn, no matter which part of the world you live in.

One thought on “Expensive – India or the US?”